Pierre-Auguste Renoir
Girl with a Guitar, 1897 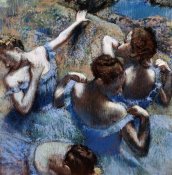 Edvard Munch
The Seine at Saint-Cloud, 1890