Gustave Courbet
Jean Journet on His Way to Conquer the World, ca. 1850 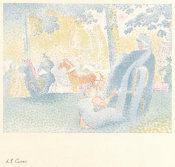 QUALITY
We love art (a lot) and are proud to offer the highest quality fine art reproductions available anywhere. That’s right – anywhere. From the inks and papers we use all the way to the care we take in packaging every order for shipment, our obsession with quality has no end.
SELECTION
With many exclusive collections, our product offering of fine art prints, digital posters, and canvas art reproductions is as extensive and diverse as you will find anywhere. That’s right – anywhere. Our curated line contains imagery for all of your decor and design needs.
CUSTOMIZATION
You have found the perfect art. Now what? Using our innovative custom framing tool you can preview exactly what your finished and framed art will look like. There is no better way to tell your art that you love it (a lot) than by wrapping it up in a custom frame.
Biography
PAUL CEZANNE
1839-1906, French painter, b. Aix-en-Provence. Cézanne was the leading figure in the revolution toward abstraction in modern painting.

From early childhood Cézanne was a close friend of Émile Zola, who for a time encouraged the painter in his work. Cézanne went to Paris in 1861; there he met Pissarro, who strongly influenced his development. He divided his time between Provence and the environs of Paris until his retirement to Aix in 1899. Cézanne's early work is marked by a heavy use of the palette knife, from which he created thickly textured and violently deformed shapes and scenes of a fantastic, dreamlike quality. Although these impulsive paintings exhibit few of the features of his later style, they anticipate the expressionist idiom of the 20th century. Through Pissarro, Cézanne came to know Manet and the impressionist painters. He was concerned, after 1870, with the use of color to create perspective, but the steady, diffused light in his works is utterly unrelated to the impressionist preoccupation with transitory light effects. House of the Hanged Man (1873-74; Louvre) is characteristic of his impressionist period. He exhibited at the group's show of 1874 but later diverged from the impressionist style and developed a firmer structure in his paintings.

Cézanne sought to "recreate nature" by simplifying forms to their basic geometric equivalents, utilizing color and considerable distortion to express the essence of landscape (e.g., Mont Sainte-Victoire,1885-87, Phillips Coll., Washington, D.C.), still-lifes (e.g., The Kitchen Table, 1888-90, Louvre), and figural groupings (e.g., The Card Players, 1890-92; one version, S.C. Clark Coll., New York City). His portraits are vital studies of character, e.g., Madame Cézanne (c.1885; S. S. and V. White Coll., Ardmore, Pa.) and Amboise Vollard (Musée du Petit Palais, Paris). Cézanne developed a new type of spatial pattern. Instead of adhering to the traditional focalized system of perspective, he portrayed objects from shifting viewpoints. He created vibrating surface effects from the play of flat planes against one another and from the subtle transitions of tone and color. In all his work he revealed a reverence for the integrity and dignity of simple forms by rendering them with an almost classical structural stability. His Bathers (1898-1905; Philadelphia Mus. of Art) is the monumental embodiment of a number of Cézanne's visual systems. The artist's later works are largely still lifes (among them his famous apples), male figures, and recurring landscape subjects. While retaining a solid substructure, they seem freer and more spontaneous and employ more transparent painterly effects than earlier works. Cézanne worked in oil, watercolor, and drawing media, often making several versions of his works.

Cézanne's influence on the course of modern art, particularly on the development of cubism, is enormous and profound. His theories spawned a whole new school of aesthetic criticism, especially in England, that has ranked him among the foremost French masters. There are fine collections of his paintings in the Louvre; the Metropolitan Museum and the Museum of Modern Art, New York City; and the Barnes Foundation, Merion, Pa.