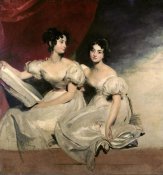 Sir Thomas Lawrence
A Double Portrait of The Fullerton Sisters 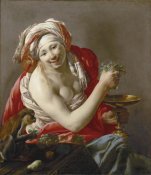 QUALITY
We love art (a lot) and are proud to offer the highest quality fine art reproductions available anywhere. That’s right – anywhere. From the inks and papers we use all the way to the care we take in packaging every order for shipment, our obsession with quality has no end.
SELECTION
With many exclusive collections, our product offering of fine art prints, digital posters, and canvas art reproductions is as extensive and diverse as you will find anywhere. That’s right – anywhere. Our curated line contains imagery for all of your decor and design needs.
CUSTOMIZATION
You have found the perfect art. Now what? Using our innovative custom framing tool you can preview exactly what your finished and framed art will look like. There is no better way to tell your art that you love it (a lot) than by wrapping it up in a custom frame.
Biography
GILBERT STUART
Stuart, Gilbert, 1755–1828, American portrait painter, b. North Kingstown, R.I., best known for his portraits of George Washington. Having shown an early talent for drawing, he became the pupil of Cosmo Alexander, a Scottish painter who was visiting America. He went with him to Edinburgh but returned to America after Alexander's death in 1773. When the Revolution threatened, he sailed to London. He became a protégé of Benjamin West, remaining with him for nearly five years. During this period he exhibited frequently at the Royal Academy of Arts and won renown with his Portrait of a Gentleman Skating (1782). Although he was then eminently successful, his extravagant mode of living kept him in constant debt. In 1787 he moved to Dublin.

Stuart returned to America, first living in Philadelphia and later settling permanently in Boston, where he became the most celebrated portrait painter of his day. He painted three portraits of Washington from life and more than 100 replicas of these three. His first, the so-called Vaughan type (1795), is a bust with the right side of the face shown; there are at least 15 replicas in existence, one of which is in the collection of the National Gallery of Art, Washington, D.C. The second, the Lansdowne type (1796), painted for the marquess of Lansdowne, is a full-length study of the president; the original is in the Pennsylvania Academy of the Fine Arts. The third, unfinished, the Athenaeum Head (Mus. of Fine Arts, Boston) named for the version once owned by the Boston Athenaeum, was commissioned (c.1796) by Martha Washington. The artist kept the original version while she had to remain content with one of the 75 replicas he subsequently painted. This portrait has been immortalized by the engraving on the U.S. one-dollar bill.

Stuart's elegant and brilliant style, partially modeled after Reynolds and Gainsborough, is seen at its best in such portraits as those of Mrs. Richard Yates (National Gall. of Art, Washington, D.C.), Josef and Matilda de Jaudenes y Nebot (Metropolitan Mus.), and John Adams (N.Y. Historical Society). He painted these and many other notable figures of the day including Thomas Jefferson, James Monroe, James and Dolley Madison, Abigail Adams, John Jay, John Jacob Astor, his mentor West, Reynolds, John Singleton Copley, John Trumbell, Washington Allston, and other artists, and a wide variety of members of the mainly American and British elite. The greater part of Stuart's works are in collections in Boston, New York City, and Philadelphia.