Vintage Nudes
Without a Blouse

Royall Brewster Smith
A Portrait of a Gentleman 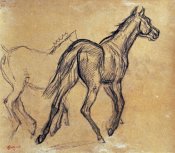