John Trumbull, Signing of The Declaration of Independence, 1817-1819

Currier and Ives
Washington's Reception on the Bridge at Trenton 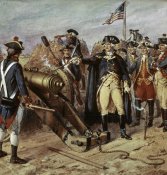 Carol Highsmith
The Peace Monument located in Peace Circle on the grounds of the U.S. Capitol, First St. and Pennsylvania Ave., Washington, D.C.

QUALITY
We love art (a lot) and are proud to offer the highest quality fine art reproductions available anywhere. That’s right – anywhere. From the inks and papers we use all the way to the care we take in packaging every order for shipment, our obsession with quality has no end.
SELECTION
With many exclusive collections, our product offering of fine art prints, digital posters, and canvas art reproductions is as extensive and diverse as you will find anywhere. That’s right – anywhere. Our curated line contains imagery for all of your decor and design needs.
CUSTOMIZATION
You have found the perfect art. Now what? Using our innovative custom framing tool you can preview exactly what your finished and framed art will look like. There is no better way to tell your art that you love it (a lot) than by wrapping it up in a custom frame.
Biography
JOHN TRUMBULL
Trumbull, John, 1756–1843, American painter, b. Lebanon, Conn.; son of Gov. Jonathan Trumbull. He served in the Continental Army early in the Revolution as an aide to Washington. He resigned his commission in 1777 and devoted himself to painting. In 1780 he went to London to study under Benjamin West. There he was imprisoned on suspicion of treason and finally deported. In 1784 he returned to London, where, at the suggestion of West and with the encouragement of Thomas Jefferson, he began his famous national history, which occupied most of his life. His small paintings (for the engraver) at Yale Univ., such as the Battle of Bunker's Hill (1786) and Death of Montgomery at Quebec (1788), are among his finest works. Trumbull excelled in small-scale painting, especially of oil miniatures (studies for the historical series), the best of which were done in the United States between 1789 and 1793. In the latter year he returned to London as secretary to John Jay and remained for 10 years as one of the commissioners to carry out provisions of the Jay Treaty.

He returned to the United States in 1804 with a collection of old masters. He painted portraits, panoramas, and landscapes, and designed the meetinghouse in Lebanon, Conn. In London from 1808 to 1816 he tried unsuccessfully to establish himself as a fashionable portraitist. Returning to New York in 1816, he finally secured a commission from Congress to decorate the Capitol rotunda; his Declaration of Independence, Surrender of General Burgoyne, Surrender of Lord Cornwallis, and General George Washington Resigning His Commission are of interest chiefly for their documentary value. In 1831 he founded the Trumbull Gallery at Yale, one of the earliest art museums in the English-speaking colonies, depositing much of his work in exchange for an annuity. He is well represented in the Museum of Fine Arts, Boston; the Wadsworth Athenaeum, Hartford, Conn.; Yale Univ.; and the Metropolitan Museum, New York City Hall, and the New-York Historical Society.