James Tissot
Jesus Stilling the Tempest, The Life of Our Lord Jesus Christ, 1886-1894 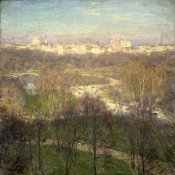 QUALITY
We love art (a lot) and are proud to offer the highest quality fine art reproductions available anywhere. That’s right – anywhere. From the inks and papers we use all the way to the care we take in packaging every order for shipment, our obsession with quality has no end.
SELECTION
With many exclusive collections, our product offering of fine art prints, digital posters, and canvas art reproductions is as extensive and diverse as you will find anywhere. That’s right – anywhere. Our curated line contains imagery for all of your decor and design needs.
CUSTOMIZATION
You have found the perfect art. Now what? Using our innovative custom framing tool you can preview exactly what your finished and framed art will look like. There is no better way to tell your art that you love it (a lot) than by wrapping it up in a custom frame.
Biography
GEORGE INNESS
Inness, George 1825–94, American landscape painter, b. Newburgh, N.Y. His father intended Inness to be a grocer, but he showed artistic talent at an early age and was apprenticed to an engraver. In 1845 he opened a studio in New York City, devoting himself to painting, and two years later with a friend's aid was able to go to Rome. He made a subsequent visit to Rome in 1851, and in 1854 he and his wife went to Paris. On their return they settled in Medfield, Mass. There Inness painted many of his best-known canvases. In later life he enjoyed a high reputation, maintaining studios in New York City and in Montclair, N.J., where most of his last 20 years were spent.

The early work of Inness is in the manner of the Hudson River school. His panoramic Peace and Plenty (Metropolitan Mus.) is characteristic of this period. But in a short time he discovered his own personal style, which became simplified, freer, more intimate, and richer in color. In the landscapes of the 1880s and 90s, edges frequently dissolve into the air, merging in a painterly haze. In these later works his subjects, covering a wide range of light effects, became a vehicle for the expression of a romantic mood. Inness was a Swedenborgian and consistently sought the mystical in nature. Among his principal works are Rainbow after a Storm and Millpond (Art Inst., Chicago); Delaware Valley, Autumn Oaks, and Evening—Medfield, Mass. (Metropolitan Mus.); June (1882; Brooklyn Mus., N.Y.); and Georgia Pines and Niagara (National Gall. of Art, Washington, D.C.). Many of his other works are in the collection of the Montclair Art Museum. Inness died in Scotland.