Winslow Homer
Boys In A Pasture

Frederic Remington
The Fall Of The Cowboy 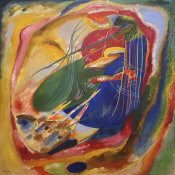